Earlier this summer, Fishtown resident Evan Reinhardt came to Fairmount Park Conservancy with an idea: “I want to run around the entire City of Philadelphia and raise funds for Philly parks.”

Inspired by Michael “Gagz” Gagliardi, the local runner who first conceived of the 76-mile run, Reinhardt took off before sunrise from Penn Treaty Park on Sunday, June 21 and with the help of friends and family, ran the entire perimeter of Philadelphia. Seventy-six miles and $2,684 later raised for Fairmount Park Conservancy, Reinhardt caught up with us post-run to share what he learned along the way.

How was the run? We’re sure it’s hard to put into words, but please share some highlights, surprises and biggest challenges.

Such an adventure! Biggest highlight was that I was able to run with Alan Dyke and Mike Brady, who I met through my fundraising campaign. Both of them ran a good portion of the 76 miles with me and I’m excited to do more runs with them in the future. I also had some other support during different portions of the run from a couple of friends, including Mike Gagz who first conceived of and mapped the route out. He ran a couple miles with me and invited me to take a quick break at his house around mile ~60. He even made me a PB&J for the road! On top of that, friends were reaching out the whole run with funny and motivational videos to help get me through.

With that in mind, I would say that this run was pretty unique in the amount of support I had. There were a few points during and after the run where I was overcome with a feeling of gratitude both for the people who donated to the campaign and for the friends who were willing to support me on the day of. Having so much support and so many people to be grateful for made it much easier to push through the hard spots. 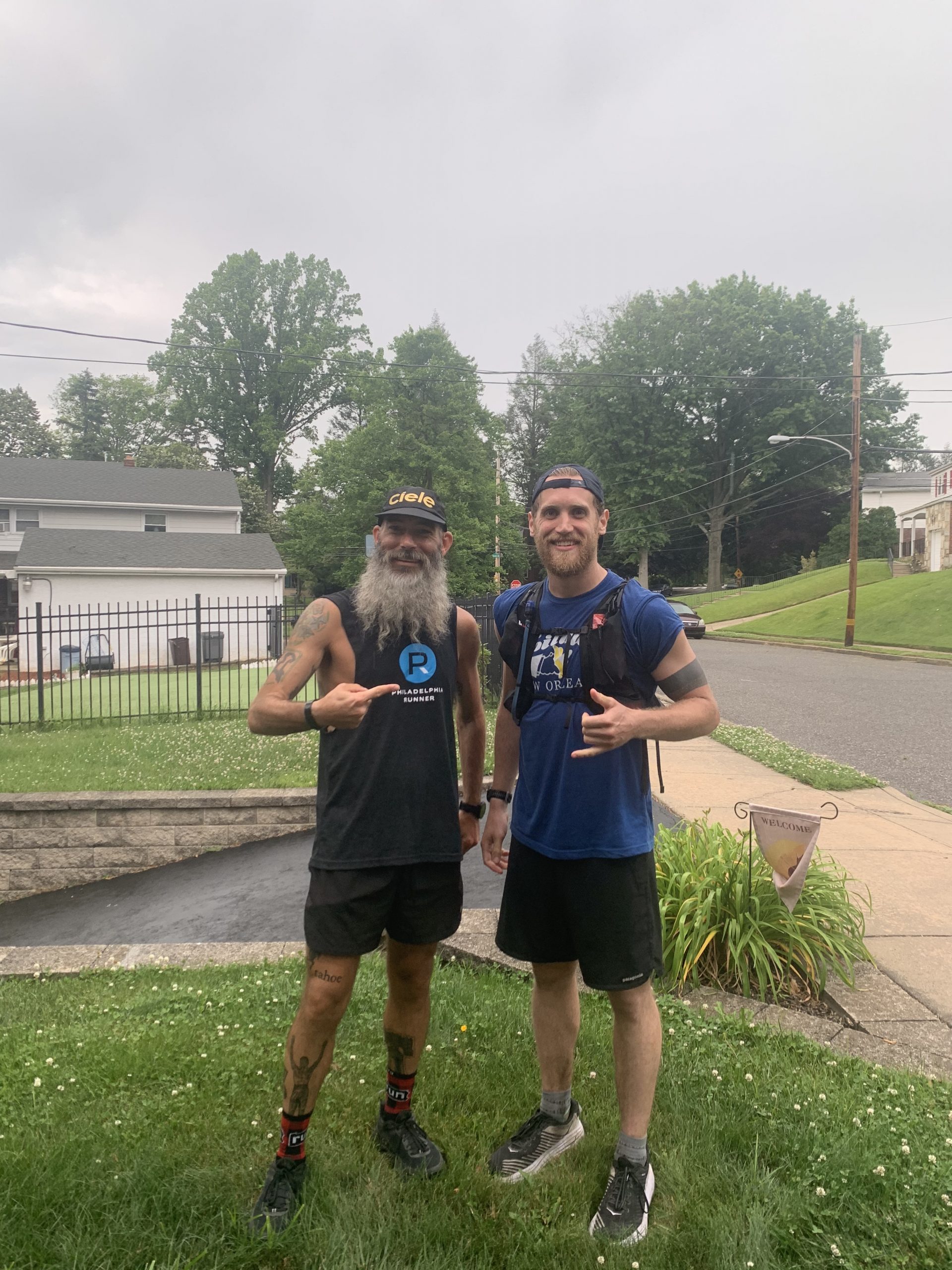 Mike Gagz (left) is the brains behind the 76-mile perimeter run of Philadelphia. He ran a couple of miles with Evan Reinhardt (right) during his own attempt.

What was it like being at Penn Treaty Park at 4am?

The park was calm and empty which made it easy to find Mike and Alan. We headed clockwise on the loop which had us running south along Delaware Avenue, past the stadiums and through the Navy Yard for the first 10 miles or so. It put us on George Platt Bridge just in time to catch the sunrise, which was really lovely.

How did you feel immediately after the run? And a few days later? What has the recovery been like?

A handful of friends met me at Penn Treaty for a socially distant distanced, post-race beverage. It went a long way in easing some of the aches and pains! I was breaking up the last ~15 miles into 1-2 mile sections, with walking/ stretching/ sitting/ crawling breaks between each, so I was definitely hurting at that point. For two days after the run I was feeling pretty banged up and the steps to my third floor bedroom were tough to cope with! That said, I bounced back after a week or so and am back into regular training now.

What was your first real meal after the run?

My girlfriend Rachel met me at the finish with a big pizza from my neighborhood joint (shout out to Four Sons Pizza!) that had “76” spelled out on it in vegetables. I had actually eaten around 4,500 calories during the run itself so I strangely wasn’t terribly hungry when I finished up. That said, I ate the whole pizza the next morning for breakfast! 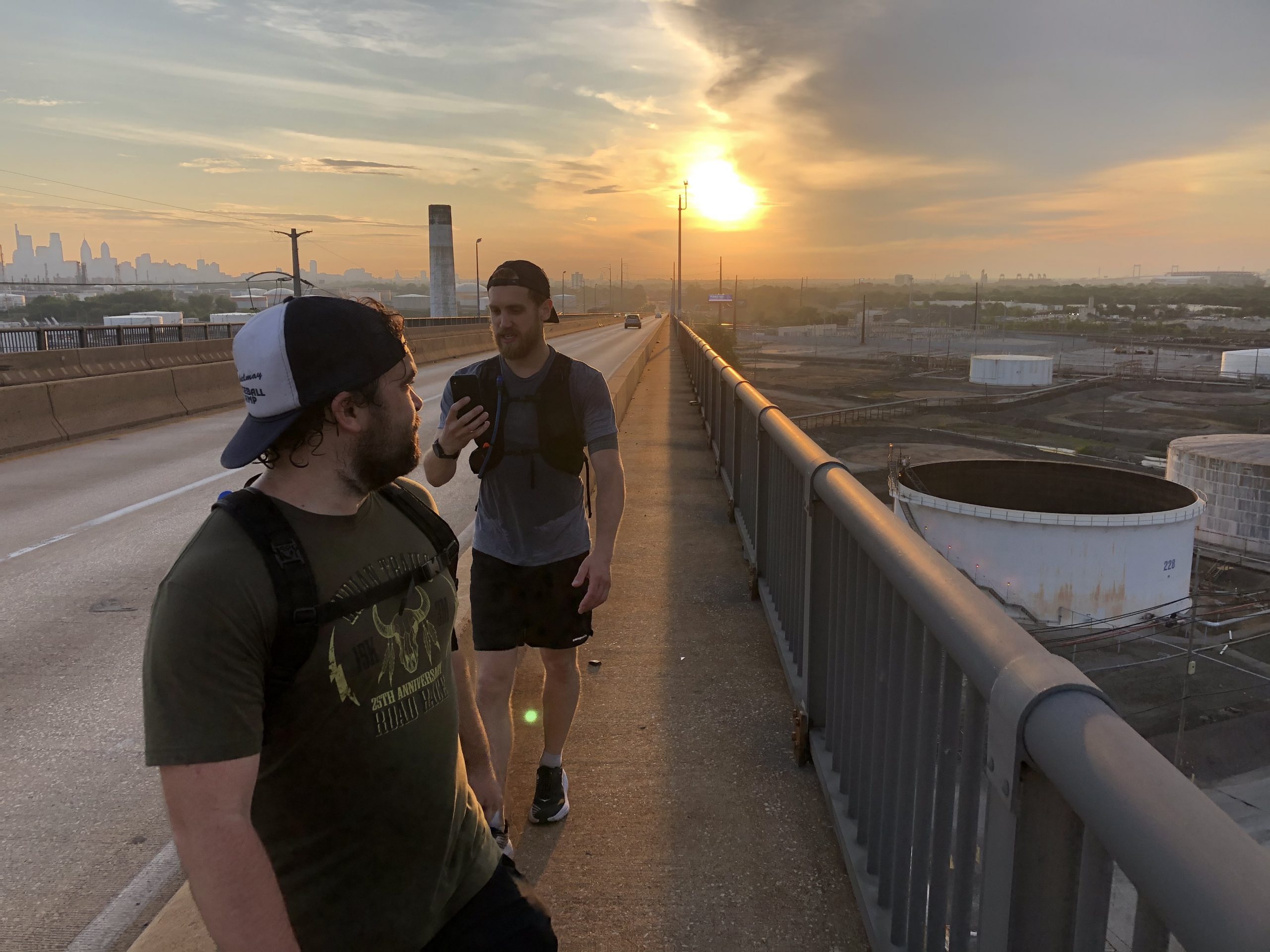 Evan and friends pause on the George Platt Bridge at sunrise.

Who or what compelled you to run the 76-mile perimeter of Philadelphia in the first place? When did you commit to doing it and why?

I had trained for a marathon that was cancelled in May and was originally planning on doing more ultra distance come Fall. When I saw the route [that Mike Gagz first conceived], I thought that it could be a good use of my training and also a challenge since I hadn’t ever run that far. I did a couple of practice sections and really fell in love with how it broke me out of my usual running locations and routines. All of this was happening during quarantine so it occurred to me that I might also be able to do a bit of good with my effort. Pairing the fundraising with the run ended up being really great for my mental health during such a turbulent time. Not only was it motivation to get me out of the house and on my feet, but it allowed me to feel like I was contributing in a small but positive way to making things a bit better. Win-win!

How did you get into running?

I started running in college. I remember training for my first half marathon and feeling so depleted afterwards! Ditto for my first marathon, which was The Philadelphia Marathon in 2016. As I began experimenting with distance, I learned that the limits we put on ourselves are often largely a construct. I’m still pretty new to the ultra scene (this was my first run above 50M), but setting these goals that seem ridiculous at the time and watching myself check them off is such a satisfying feeling. That concept had a ton of spill over into the rest of my life. That and I find I’m happiest and most satisfied when I am fully tired out.

Tell us a bit about what you do professionally and why your employer chose to match your donations.

I’m a third generation commercial contractor and small-scale developer. I joined the Urban Land Institute to educate myself about my industry, but also because I’m genuinely interested in how cities are built and come together. Through attending ULI events and my own exploration, it quickly became clear to me that the benefits of open, public space are such a huge asset for a city in so many different ways. Being a runner has made that knowledge all the more intuitive. With all of the turmoil from the pandemic it made sense to put a bit of our resources into an organization that is such a grounding force for the city. Just a small way of trying to make the place we live and work a little better.

Why do parks matter to you personally and what compelled you to choose Fairmount Park Conservancy?

I’ve taken advantage of the park system since I started living here, but had never realized the extent and breadth of the work Fairmount Park Conservancy did. Hearing Allison Schapker, the Conservancy’s Senior Director of Capital Projects, speak at one of our ULI events helped put the work they do into context and helped me to understand the impact that the parks (and by extension the Conservancy) have, both as environmental stewards and promoters of equity in the city.

Where are you from? Any other interesting facts to share?

I grew up in West Chester, PA and had a pretty typical suburban experience with the city. In my early 20s I lived in a lot of different places: New Orleans, Beijing, Madrid, and stints in Central and South America – always looking for a place that felt like I could fully settle in. When I made the decision to come home and work for the family business, I knew that I wanted a more urban lifestyle, so I ended up (somewhat randomly) renting in Fishtown. I really quickly fell in love with the city and realized that the place I’d been looking for was in my backyard the whole time. It’s been about 5 years now and still going strong! Running has helped me to get to know the city in a much more intimate way, and the coolest part of this route Gagz put together is that it has introduced me to so many new areas and neighborhoods that I wouldn’t have otherwise known about.

The Broad Street Run has gone virtual and anyone interested in raising funds for Fairmount Park Conservancy now through November 1st, 2020 is still welcome to join our team.

All photos courtesy of Evan Reinhardt. 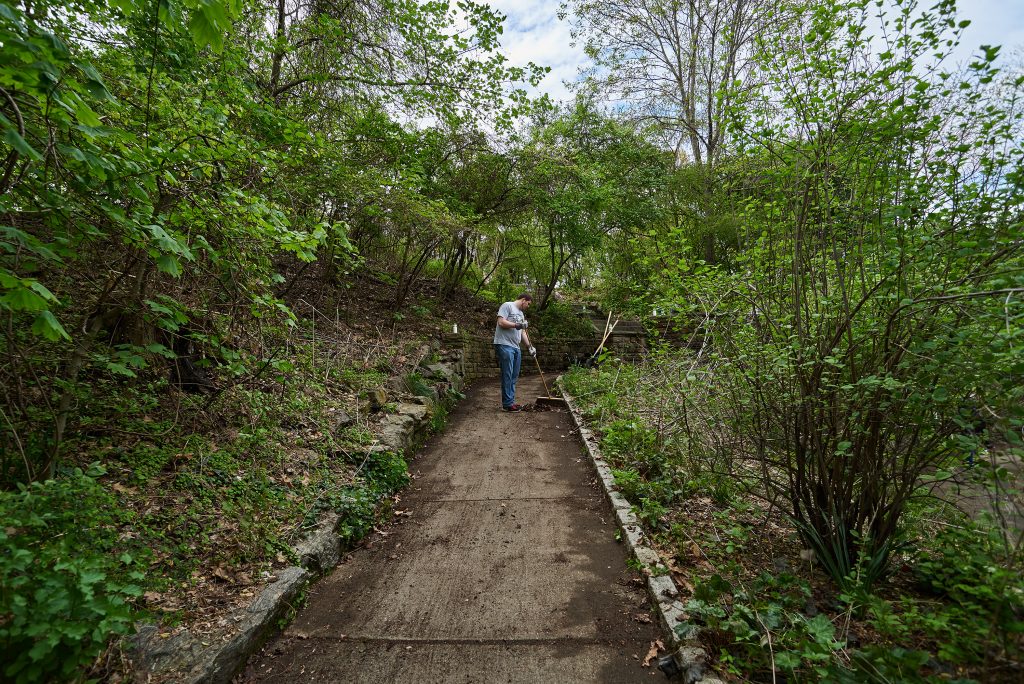 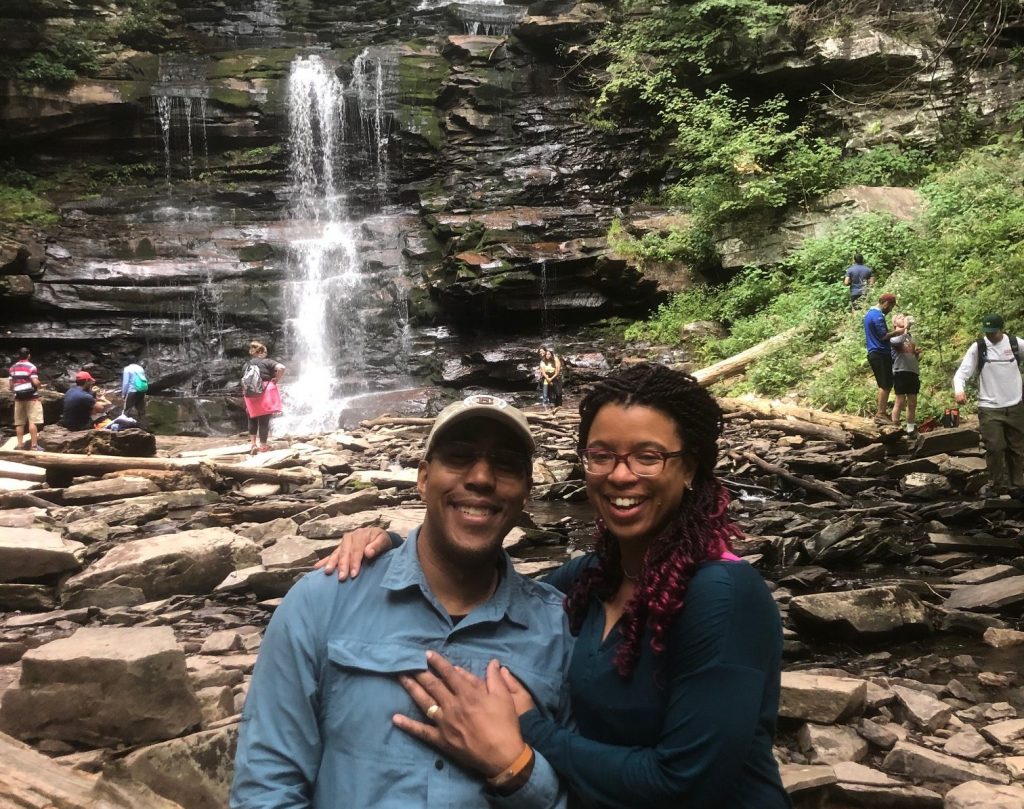