Every month learn about a neighborhood park in Philadelphia as part of a new park profile series on the My Philly Park blog. First up: Cianfrani Park in Bella Vista. 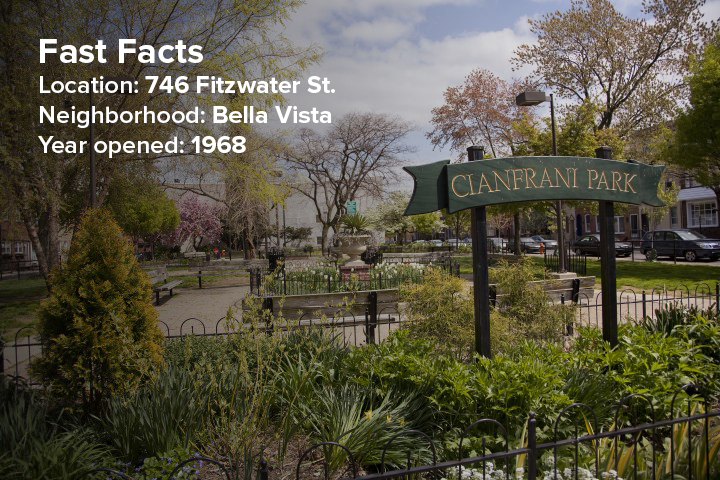 It’s a frigid winter afternoon at Cianfrani Park, a small public square in Bella Vista that dates back to the 1960s. Yet the cold weather doesn’t stop neighbors from strolling through the square on their way home from work, or from taking a moment to admire the Pyramid of Lights display in the center of the park.

But Rosemary Capircchio remembers when the park wasn’t so much a park as an unkempt piece of land, formerly the site of Ringgold Grammar School. “There was a chain-linked fence around the park,” she recalls of the 1980s when she moved into the neighborhood. “It was a messy and mostly home to a pack of wild dogs.”

“It was not pretty.”

Today, Cianfrani Park is a beloved neighborhood park filled with curved walkways, blooming gardens in the spring and summer, and a statue of one of the only remaining original city seals. It also has one of the oldest active Friends groups in the Philadelphia Park Friends Network.

The park’s impressive transformation is much in part due to the Friends of Cianfrani Park, a small group of neighbors who have volunteered their free time to activating the public space and turning it into the beloved neighborhood park it is today.

Just a few months after celebrating the park’s 50th anniversary, Capircchio and fellow Friends member Elaine Ulmer took time to reflect on the park’s past, present, and future.

The birth of Friends of Cianfrani Park

Shortly after Capircchio moved to Bella Vista, Elaine Ulmer and her husband followed. The most Ulmer, Capircchio, and a handful of other neighbors could do was pick up trash and litter in the park every once in awhile.

But the turning point took place in the 1990s, when the park really began to deteriorate; graffiti appeared on benches and wall, trash accumulated, and safety was an issue for children and neighbors. “Everyone was like, ‘This can’t go on,’” says Ulmer.

With collective momentum to make Cianfrani Park a better and safer community space, the neighbors came up with a vision and formed the group Friends of Cianfrani Park. It was one of just a couple dozen of official Park Friends groups in Philadelphia at the time. “It was the wild west,” says Ulmer. But, she adds, “When we first started doing this, everyone got along quite well.”

Slowly, the group made small yet transformative improvements to the park – it took the first five years to raise enough money to install iron fencing around just one garden. They began hosting Fall Festivals in the park in 1995 and sent out flyers to Bella Vista residents, seeking help to improve the park.

The neighbors – many of them architects and landscape architects – also came up with an ambitious master plan to address the many needs of the park: more entrances, new benches, gardening beds, improved lighting, permeable paving, and new trees. “Everything you see in this park was done to solve a problem,” Ulmer explains.

“It was a real group effort,” says Capircchio. “There were regular meetings to discuss what we wanted and it really worked well.”

The catalyst of the master plan

But it wasn’t until many years later around 2014 that the master plan moved forward, thanks to a unique gift to the park: a statue of “Peace and Plenty,” the official City of Philadelphia seal.

Originally located on the entrance to the former Fante Leone Pool at Darien and Montrose Streets, the statue needed a new home – plus $4,000 to move it to the park. Ulmer and Capircchio asked Councilwoman Mark Squilla for help.

“He looked around the park and said, ‘You need more than just a statue here,’” says Capircchio. “There were areas of the park that were sinking, the benches were so old – we needed help.”

The statue proved to be a catalyst for the rest of the master plan, and Ulmer and Capircchio spent the next few years working with the city and Philadelphia Parks & Recreation to bring the project to life.

The future of Cianfrani Park

The fruits of the labor came to fruition in 2018 when they celebrated the park’s 50th anniversary with a party in the park. Ulmer says out-of-town visitors are always surprised when they realize that neighbors volunteer their time to take care of their parks. “The trust that the city put in us and the resources we’ve received – it’s really humbling,” says Ulmer.

After the group’s longtime efforts, Ulmer and Capircchio look forward to the park’s future and the next generation of stewards to take the reigns of the Friends Group. “I feel like we’ve reached the pinnacle of what we can do,” says Ulmer. “We’re working very hard to push that continuum forward.”

The duo has some advice for other Friends Groups and their own, too. “Perseverance is your most valuable attribute,” says Ulmer. “Just keep plugging away, showing up, and keep on doing. It all works out.”

Even though the master plan has been realized, Ulmer’s work in the park is far from over. “I plan on keeping up with the gardens. As long as I live here, I’ll be in those gardens.” 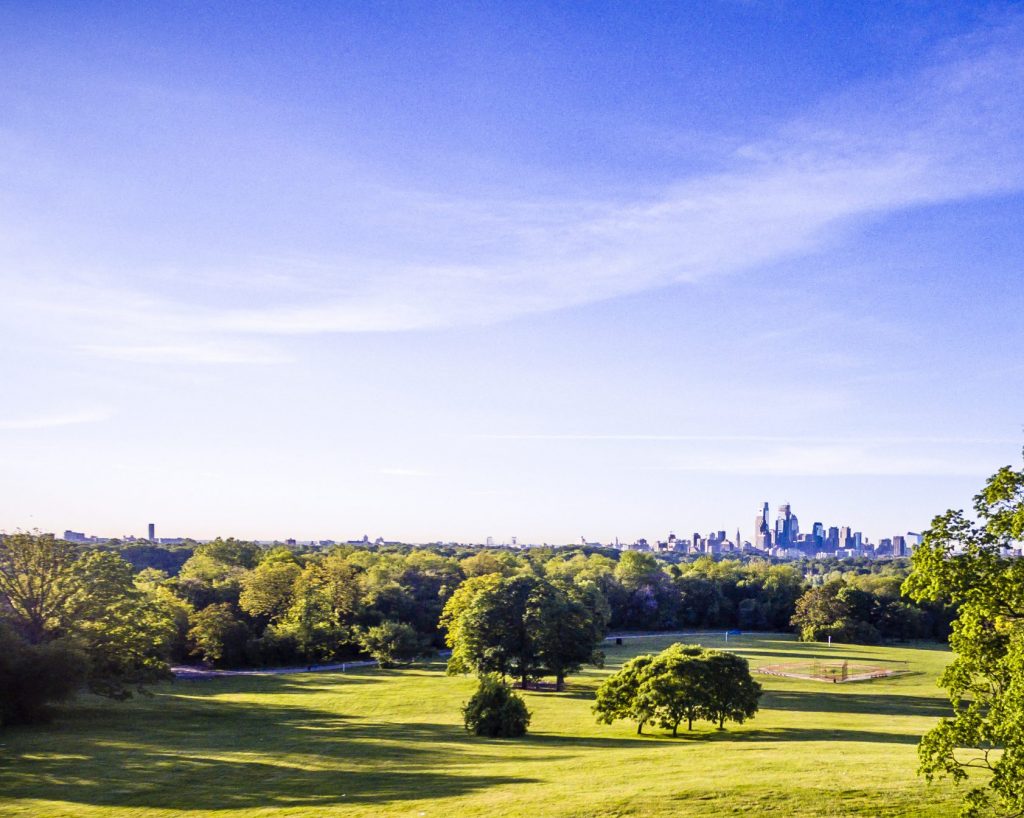 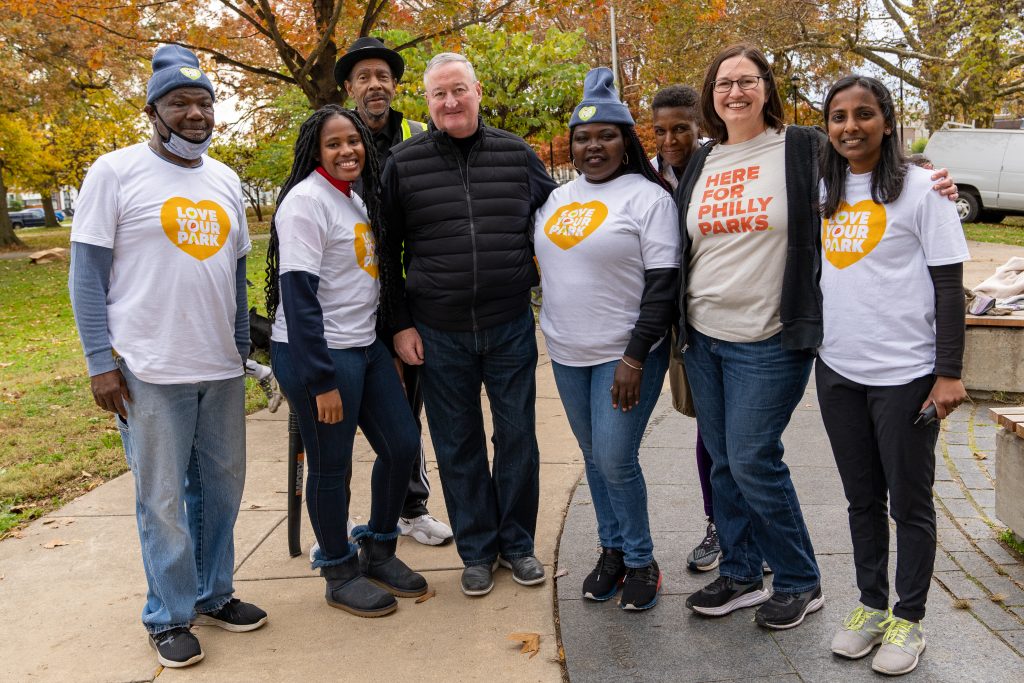 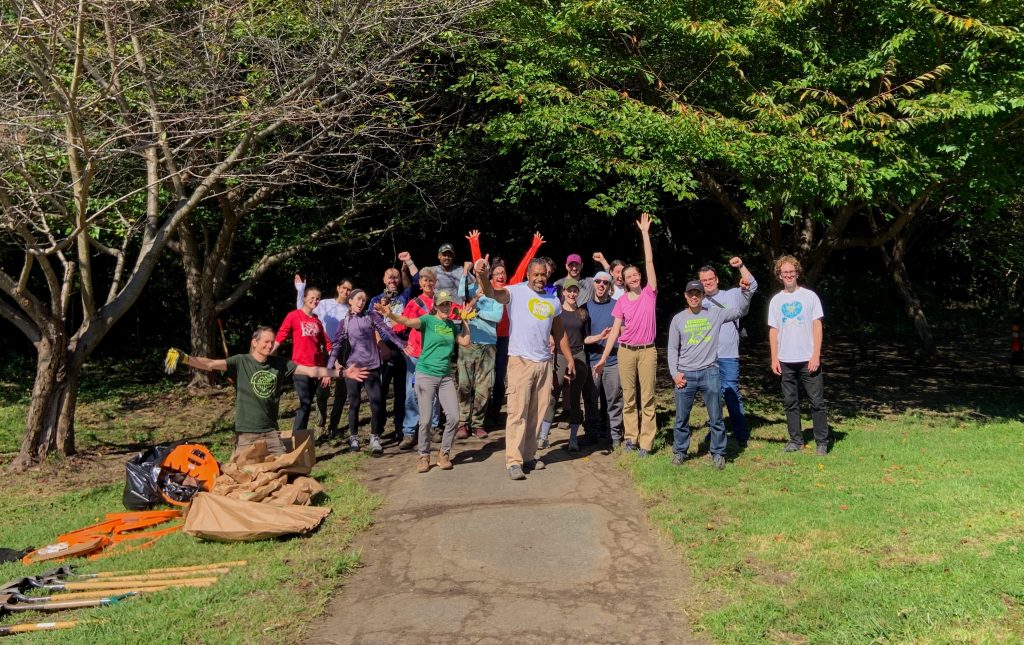