Tom McPoyle joined the Fairmount Park Conservancy in 2006,excited to join a team where his love of preservation intertwined with his passion for the outdoors. As director of the Conservancy’s architectural conservation program, he leads a team of architectural conservators and conservation technicians and oversees the work of the Conservancy’s hands-on team. He enjoys working for a nonprofit that has a direct impact on the way park users experience our built heritage.

Tom brings over fifteen years of conservation experience to his role at the Conservancy. He has also been teaching preservation workshops to the community for over a decade and hopes to make preservation ideas and techniques more accessible to all Philadelphians. Tom was raised in central PA where he started his career in preservation working with a firm that specialized in historic decorative surfaces. He has a sculpture background and earned a Bachelor’s degree in Fine Arts from the University of Delaware. He enjoys working on his mid-19th century farmhouse, going on camping excursions and walking the Wissahickon with his family. 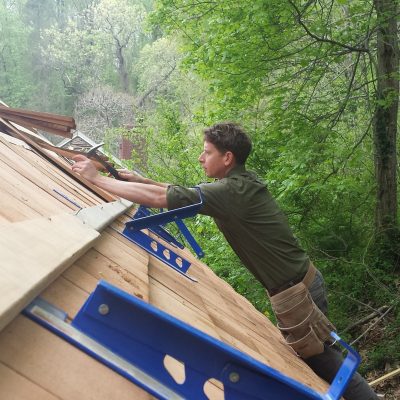