In honor of Love Your Park Week (May 12-20, 2018), we’re highlighting some of Philly’s amazing parks and Park Friends Groups who work hard to keep their neighborhood’s public spaces clean, green, and beautiful. This week, get to know Fisher Park Community Alliance and Fisher Park, this year’s signature site!

At this year’s Love Your Park Week kick-off service day on Saturday, May 12, the rain held off long enough to allow thousands of volunteers across Philadelphia to participate in volunteer cleanups in parks across the city.

Nearly 100 volunteers gathered at Fisher Park in Olney to plant more than a dozen trees, mulch, clean up litter along the hiking trails, and tend to the community garden. The beautiful 23-acre, hilly park was selected as this year’s signature site and has been cared for by Fisher Park Community Alliance since the 1980s.

“We know of the hard work that Fisher Park and all of our park stewards across the city do on a daily basis to care for our public spaces,” said Jamie Gauthier, Executive Director of Fairmount Park Conservancy. “Spaces like this one, Fisher Park, that offer connection nature, opportunities for recreation in this bustling neighborhood, and a place for Olney’s diverse cultures to converge and connect – what you’re doing here to steward this urban respite is very important. It’s why we selected Fisher Park was selected as this year’s signature site.”

Located in the most diverse neighborhood in the entire Commonwealth of Pennsylvania–36 languages are spoken in Olney–Fisher Park is a “hidden gem in our park system,” said Kathryn Ott-Lovell, Philadelphia Parks & Recreation Commissioner. “It’s really such an amazing asset to this community.” 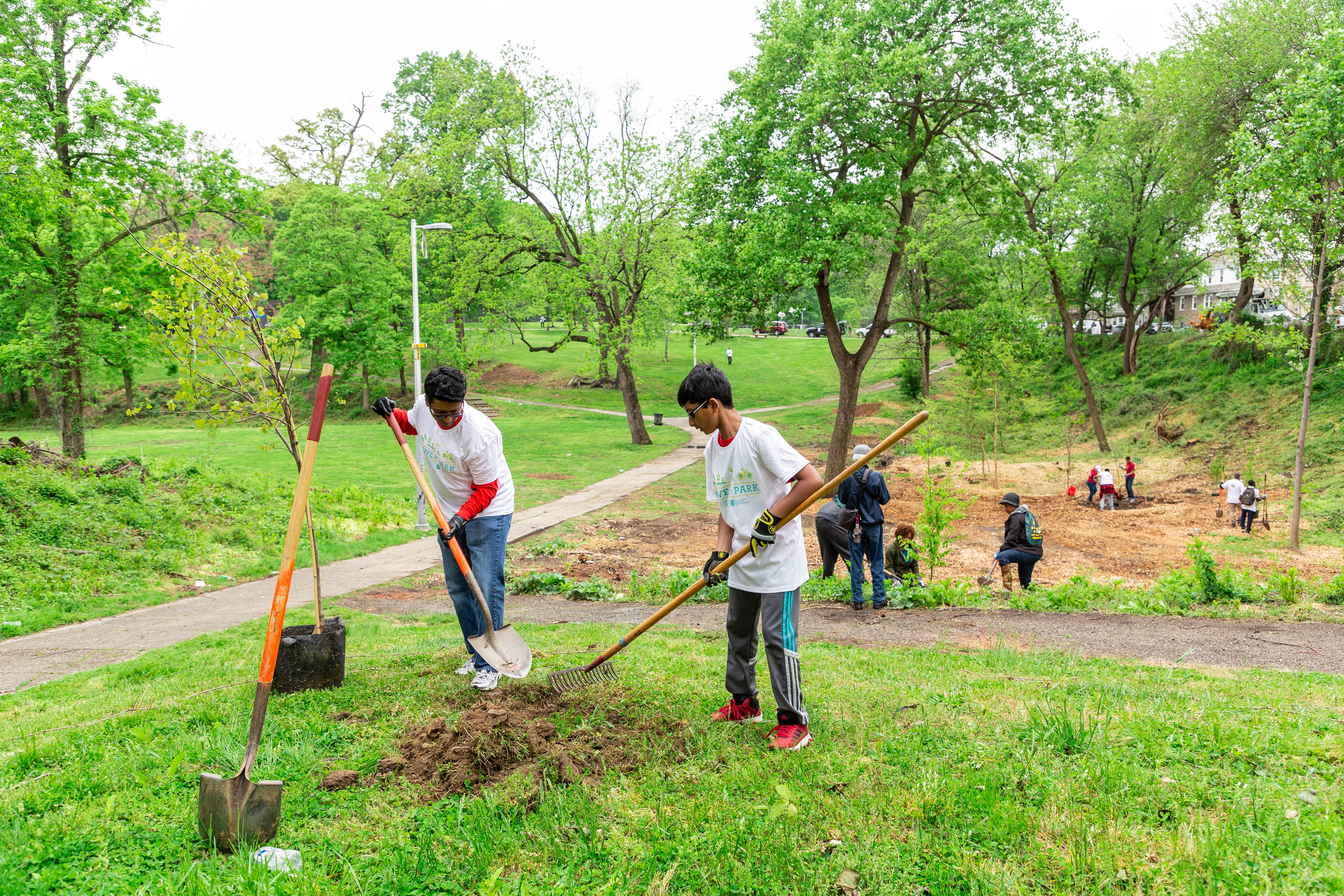 Fairmount Park Conservancy Board Member Max Berger remembers exploring Fisher Park with his brother in the sixties. “Fisher Park was the closest place to Nature, “woods”, my brother and I had while growing up in east oak lane. We could easily walk to it by ourselves and wonder through, what to us was, a thick forest of mature trees and explore. We’d find all kinds of interesting insects, animal dens, fallen trees and make adventures there. We weren’t playing tennis and there were no organized sports in our generation as there are today so we had to create our own activities.”

But Fisher Park changed in later years. Olney residents Laurel Sweeney and Jon Musselman remember when the park was abandoned, thought of more as a nuisance than a community asset. “We moved to a house facing the park in 1993,” recalled Musselman. “I really loved the woods there, but there were so many issues around the park, from abandoned cars to trash to broken lights.”

“It was treacherous, to be quite honest,” added Sweeney. “That was more reason for us to get together and be recognized as a bona fide group to maintain the park.”

In the early 2000s, Fisher Park became one of the first participants of the Conservancy’s Growing the Neighborhood Initiative, which was sponsored by Chubb Charitable Foundation and NovaCare Rehabilitation. Through a series of grants, Fisher Park Community Alliance was able to make a long list of capital improvements to their park, from providing a water source to their community garden to tree plantings to installing new playground equipment.

As a result, the park’s usage more than doubled.

Jeannette Arthur of Chubb Charitable Foundation, which continues to sponsor the Conservancy’s Love Your Park program,  says the grants have allowed Fisher Park Community Alliance and other friends groups to make park improvements over and above what the city was able to provide at the time.  It has been rewarding to see Fisher Park grow and evolve since then.

“Fisher Park, along with other Philadelphia parks, has a dedicated friends group who has helped the park showcase its natural beauty by cleaning and maintaining the park with clean ups and other small improvement projects as well as offering community events like movie nights.” 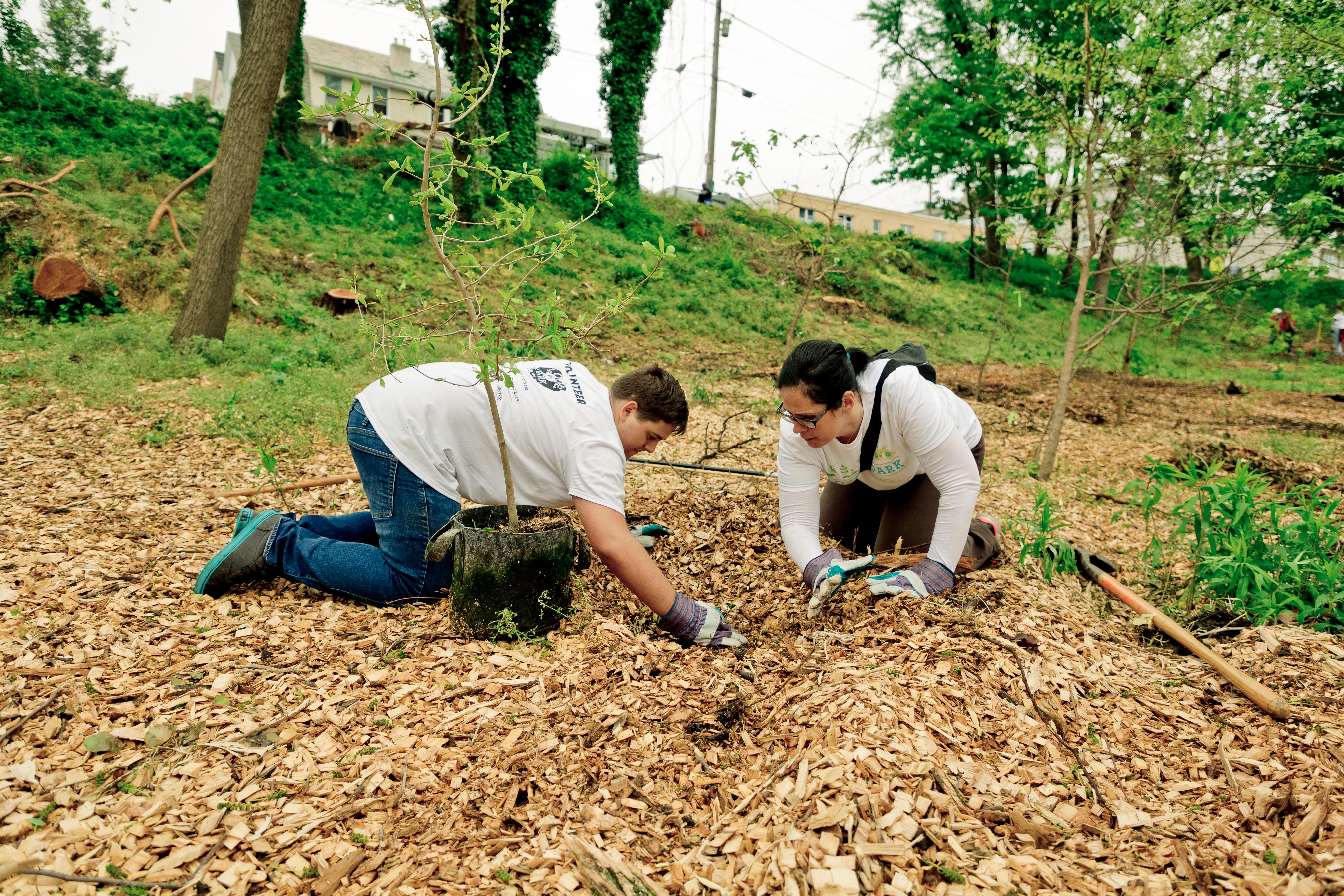 Jeannette Arthur and her son prepare to plant a tree at Fisher Park.

Today, Sweeney describes Fisher Park as a passive park, where the neighborhood comes out to run, walk, play basketball and tennis, and garden. With two-thirds of the park covered in woodlands, Musselman adds that the beautification efforts and working with Parks & Recreation’s arborists have attracted wildlife as well, from foxes and deer to a variety of birds.

Sweeney adds that an annual summer arts camp lets children appreciate “how pretty and inspirational the park is for the arts.” Fisher Park Community Alliance also works closely with the North 5th Street Revitalization Project and Olney CultureLab to put on music nights, movie nights, and dance performances in the park.

“As the most culturally diverse area in Pennsylvania, we have had to contend with that as far as pleasing everyone by providing various types of programming,” said Musselman. 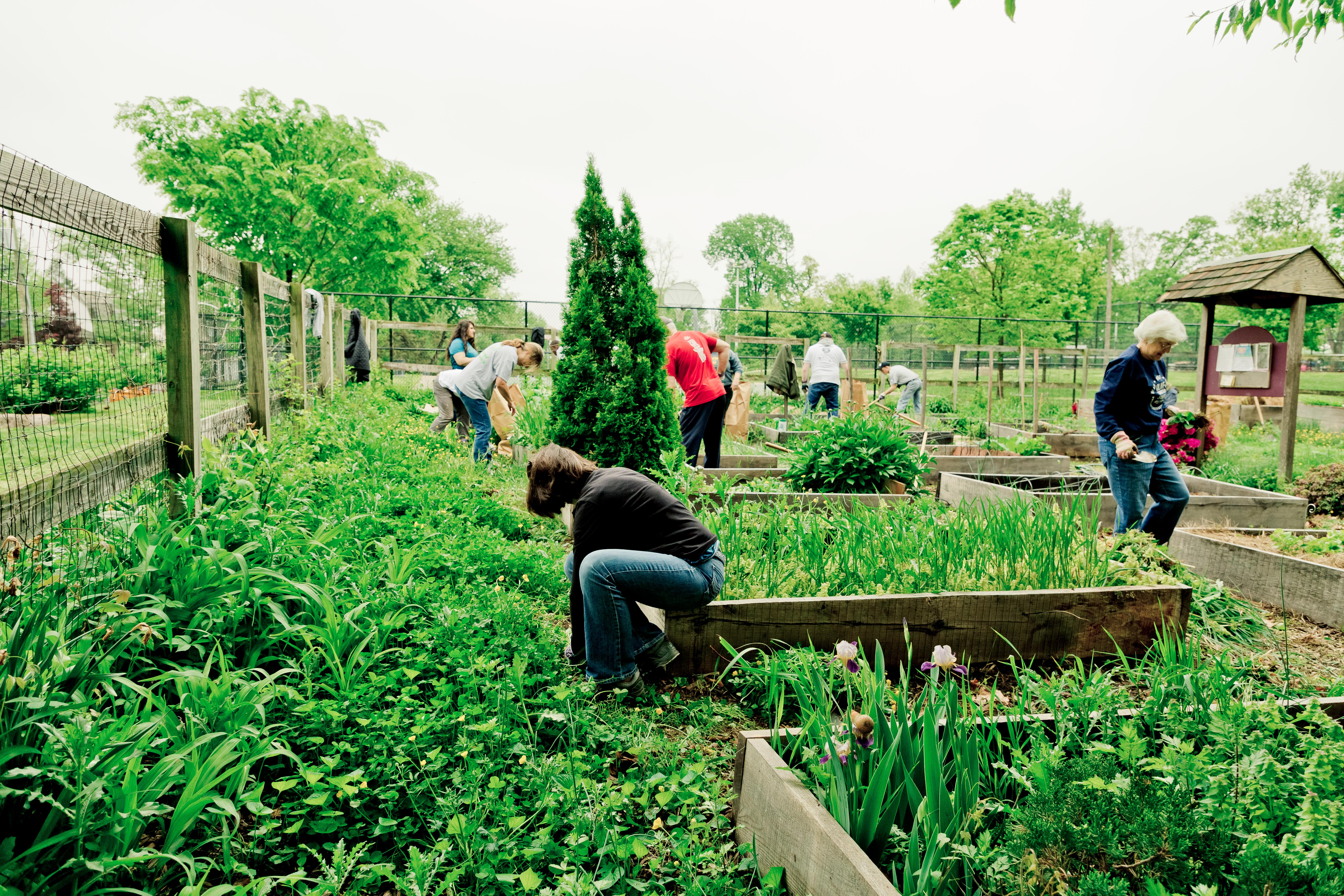 But while Fisher Park has enjoyed success and growth in recent years, Sweeney says Fisher Park Community Alliance wants to ensure that it continues over into the next generation of park stewards.

“Our efforts right now are to try to sustain our efforts in the park,” she said. “That’s why this is going to be very, very important to our neighborhood because we do have new people moving in and starting families, who we hope will get involved in the park and become future leaders and sustainers of what we’ve established.”

At the Love Your Park Week service day on May 12, many volunteers, including those from Love Your Park sponsors Blackrock, TD Bank, Bank of America, and PECO, said it was their first time visiting Fisher Park and expressed their amazement about the park and the neighborhood.  Mayor Jim Kenney, who was there to lend a hand, said that’s what makes Love Your Park Week so important.

“One of the joys of living in the city with so many unique and dynamic neighborhoods is getting the opportunity to explore them,” the Mayor said, who thanked Chubb Charitable Foundation and the Knight Foundation for their support of park stewardship and Love Your Park Week. 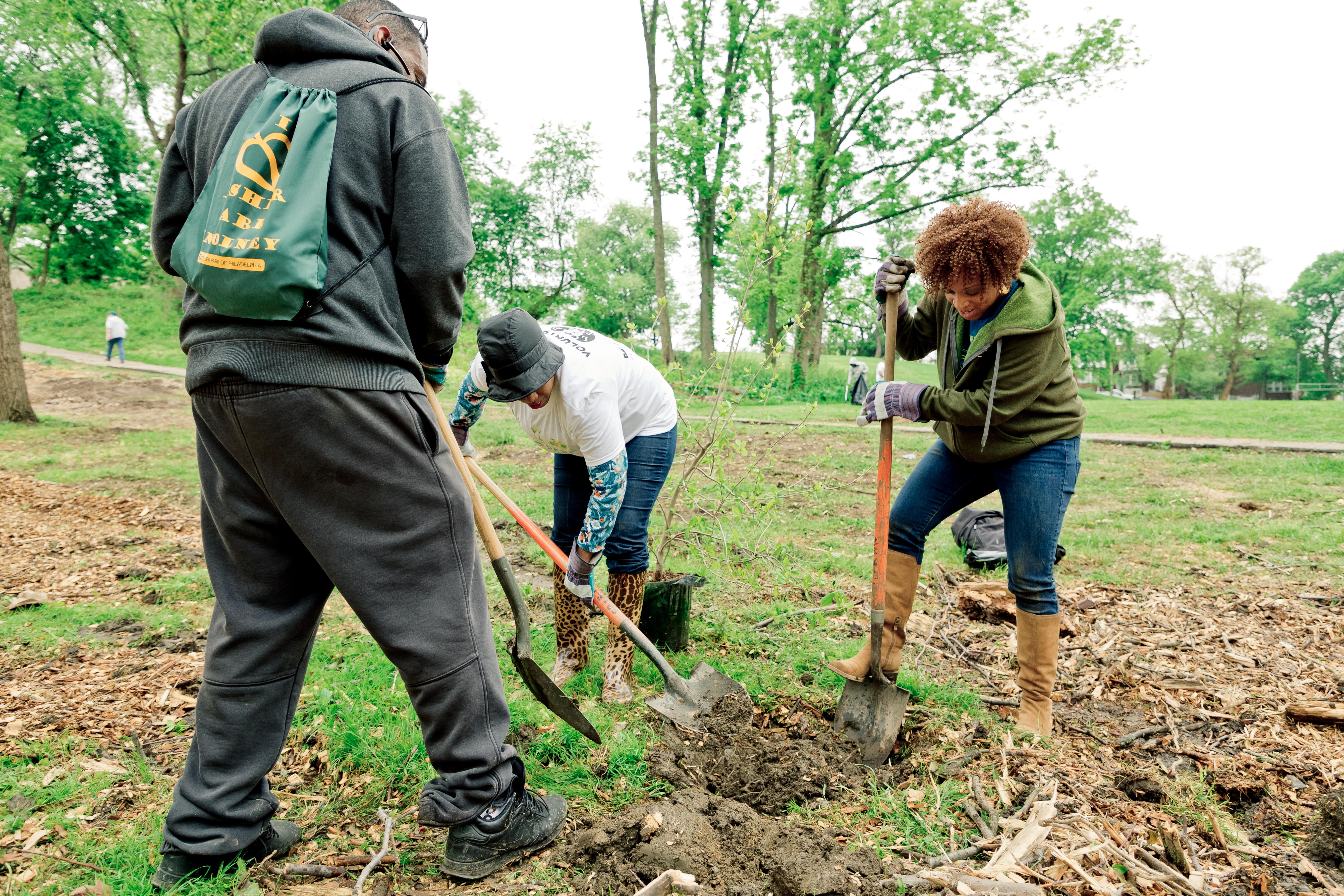 Jamie Gauthier, the Conservancy’s Executive Director, plants a tree with the help of volunteers at Fisher Park.

Kyasha Tyson a representative for Councilwoman Cherelle Parker, added that the 9th District was excited to share Fisher Park with the rest of the city. “The jewel of our community is Fisher Park in one of the most diverse areas in the entire Commonwealth of Pennsylvania,” Tyson said. “This is a neighborhood of people who love this community and we appreciate you taking the opportunity to share this day with us.”

Sweeney had the last word at the May 12 signature site. Surrounded by dozens of people who have helped steward Fisher Park into the urban oasis it is today, Sweeney said, “This is a great moment. I’m going to quote a famous group: ‘All you need is love.’” 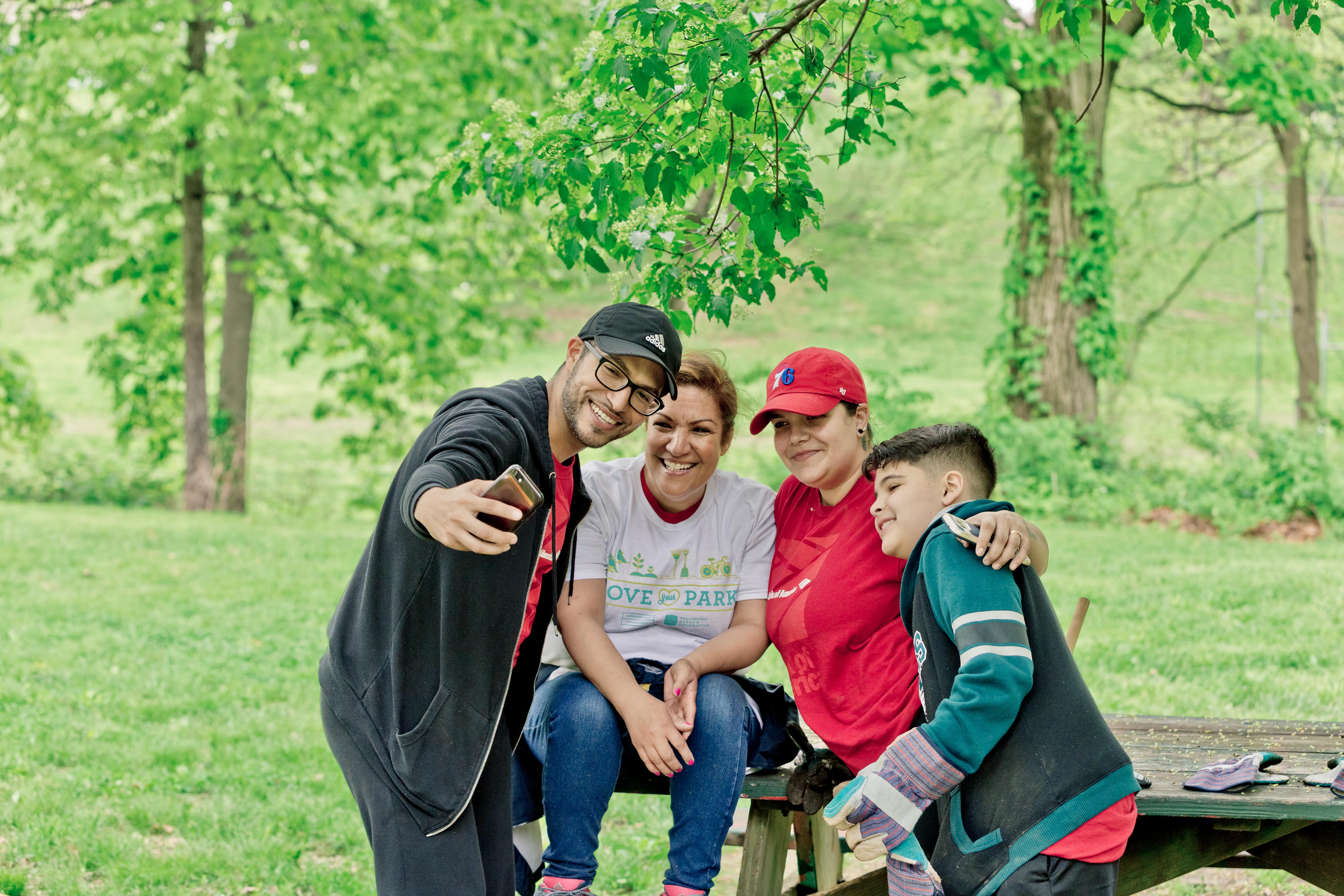 Love Your Park Week, a week-long celebration of Philadelphia parks, runs from May 12-20! Explore and enjoy parks across Philadelphia with more than 50 free events and volunteer opportunities. Learn more at loveyourpark.org. 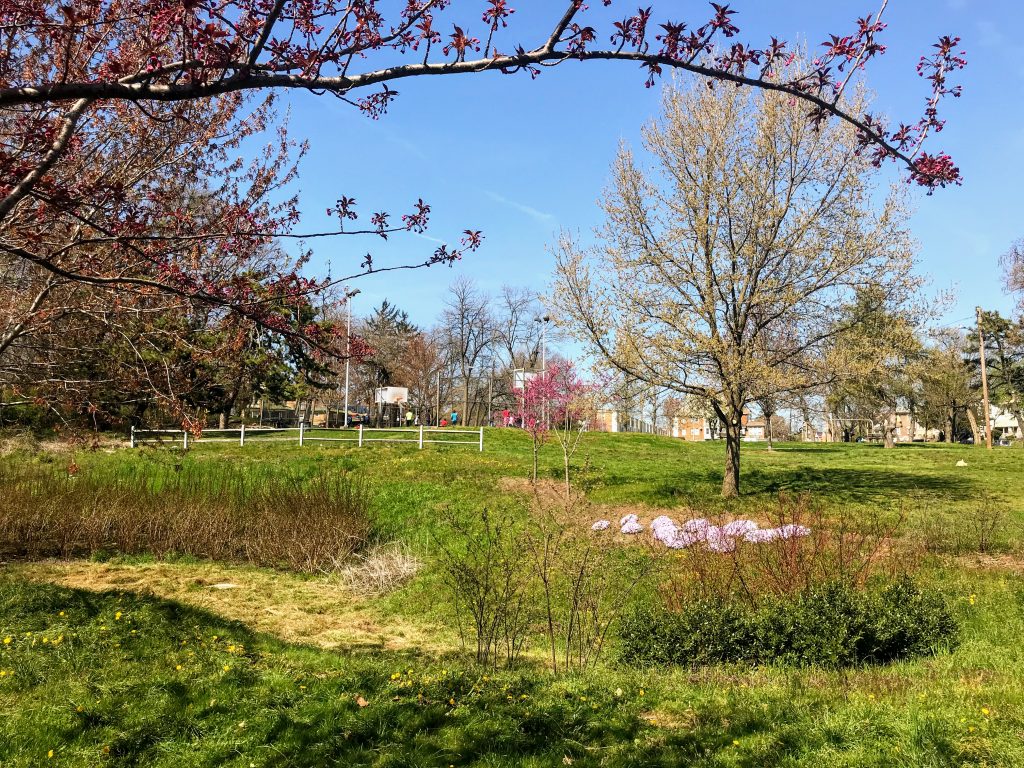 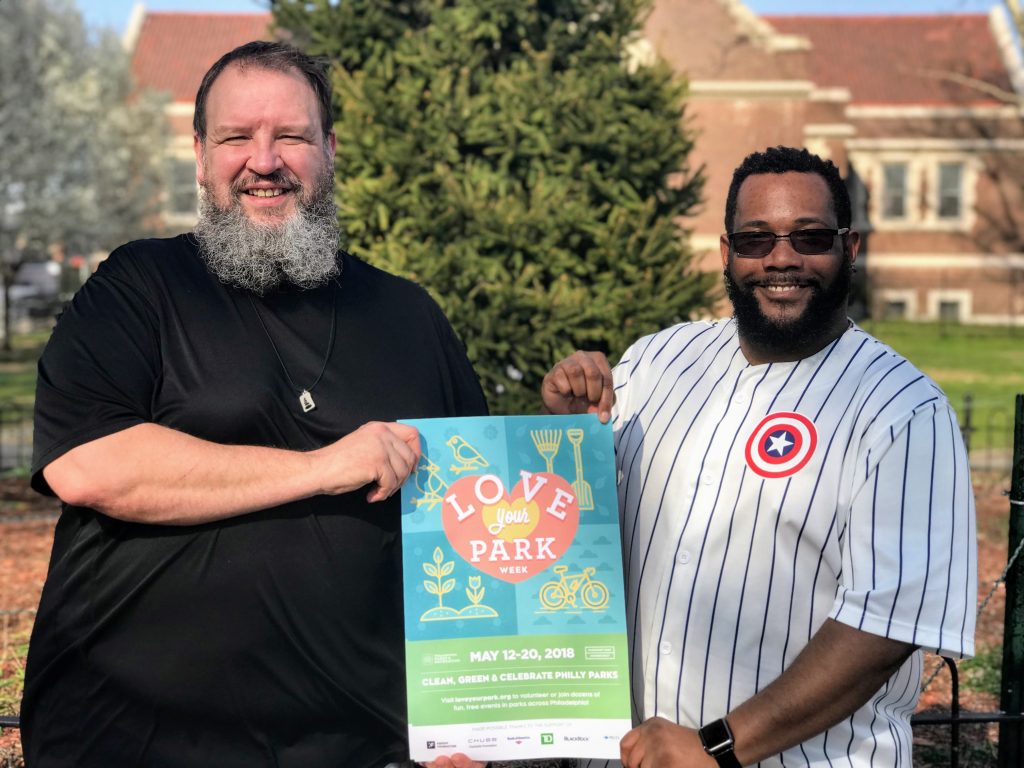 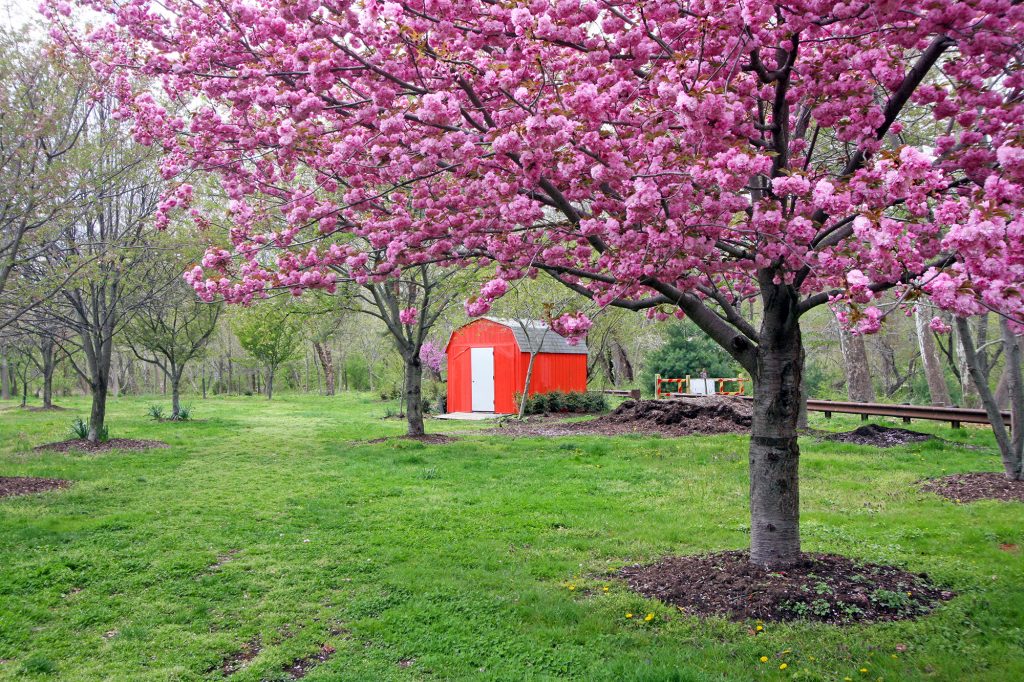